A quality spinning reel can simplify a day out on the water. They offer accurate casting without the tangled fishing line that can result from a lack of experience with bait-casting reels. But, they can also be expensive, with some costing hundreds of dollars. That’s why we went on a quest to find the best spinning reels under 50 dollars.

Don’t let high prices keep you from enjoying these smooth operators. There are plenty spinning reel options available to the frugal fisherman. The one caveat is that the more affordable spinners are confined to the light-tackle aisle. If you’re deep-sea fishing, you’ll need to look elsewhere.

For those of us content to chase the smaller species, a quality spinning reel under $50 is completely doable. The following reels are some of our favorites. They are all made from quality materials, and will each do their job all day long while keeping up with reels costing much more. 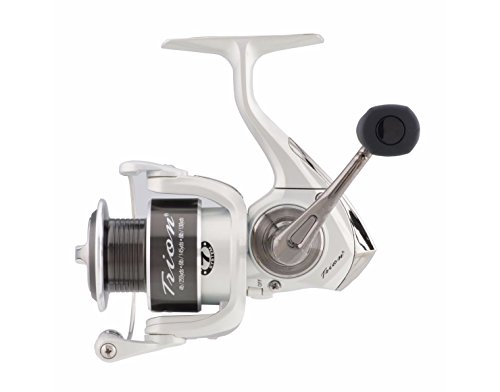 Pflueger has been making spinning reels since the 1950’s and continues to build dependable rods and reels that won’t break the bank. The Pflueger Trion is the company’s “workhorse” reel. It uses a 7-bearing system and has a graphite body and rotor. The aluminum spool is lightweight but durable. You’ll get 5.2 reel revolutions on one crank of the Trion’s handle (5.2:1 gear ratio).

Still, if you’re just pulling some bream out of a pound, the littlest Trion is all you’ll need. The TR135X can handle all but the largest trophy bass and sells for the same price. For the cost, it is hard to find a spinning reel that can beat Pflueger’s perennial best seller. 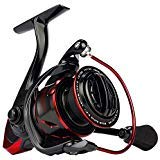 The KastKing Sharky III is the thirds version of KastKing’s reliable, smooth operating spinning reel. It has a 10+1 bearing system (stainless steel) and a graphite body, which is waterproof. The aluminum spool is CNC-machined and has a large line capacity for a reel at this price point. Its gear ratio is 5.2:1.

The Sharky III comes in five variations. The 5000 series maxes out at 153 yards of of 16-pound test and its buttery-smooth graphite drag system can handle 39.5 pounds. But that reel busts our budget by about ten bucks. At the affordable end, the Sharky III-1000 can spool up to 131 yards of 10-pound test, has a 33 pound maximum drag capacity. Prices fluctuate, but the price on the 1000 usually slips in under budget, but just barely.

The Revos, while still widely available, is now replaced by the REVOS LT… there are a few upgrades. But, the older reel is still a great value. The LT also offers some great prices coupled with a few changes. The biggest is a 2 oz. weight reduction (2000 model) and 5 oz. in the 4000 model. A new gear system is also a plus, and the refined housing  looks great while promising increased strength (aka “toughness”). Another change that we noticed is they’ve moved to a 4 bearing design. 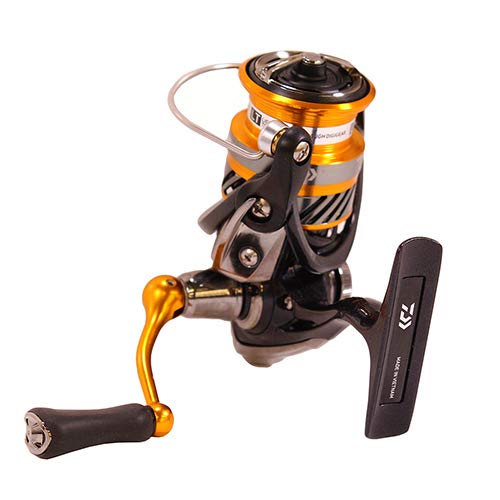 Daiwa has been a popular name in fishing equipment for decades. The company has a reputation for offering quality reels and rods at all price levels. The Daiwa Revros is a great example of a well-built reel on a budget. It uses a 7+1 bearing system with a composite body, cover, and rotor. Daiwa removed unnecessary material from the “air rotor” to save weight. The spool is made from ABS aluminum.

The Revros has a respectable 5.6:1 gear ratio. The light-action REV2000H weighs only 8.3 ounces and has a drag limit of just 4.4 pounds. The medium-action REV2500H, on the other hand, is good for fish up to 13 pounds, can spool up to 200 yards of 10-pound test, and cranks more than a yard of line per turn. The Revros gives you Daiwa durability on a budget. 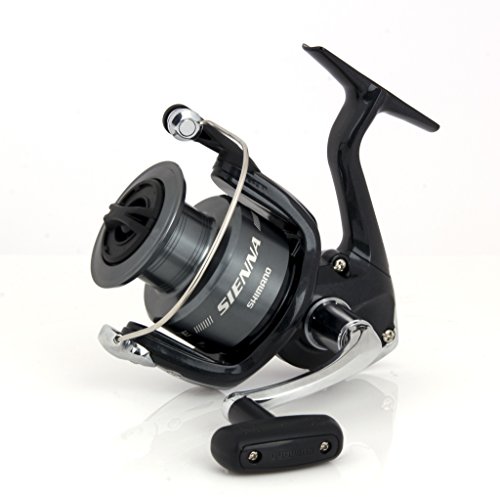 Shimano managed to pack in features found in more expensive reels while keeping the Sienna’s cost entry-level friendly. One thing you’ll notice the first time you pick it up is the lack of slack on the anti-reverse. Shimano’s DynaBalance graphite rotor keeps things smooth for a 3+1 bearing system, and the low-profile spool lip allows for long casts. The body is also graphite.

The lightest Sienna is the SN500FD. It weighs just six ounces and can spool 100 yards of 4-pound test, but it has a low gear ratio of 4.7:1. Move up to the bigger SN400FD, though, and the aluminum spool can handle 160 yards of 12-pound monofilament, and the gear ratio improves to 5.2:1.

The SN500FD, while still widely available online, is now replaced in the lineup by the Sienna FE… there are a few changes. But, the older one probably a better value. The FE is a little heavier, has a single bearing design, and a revised body. 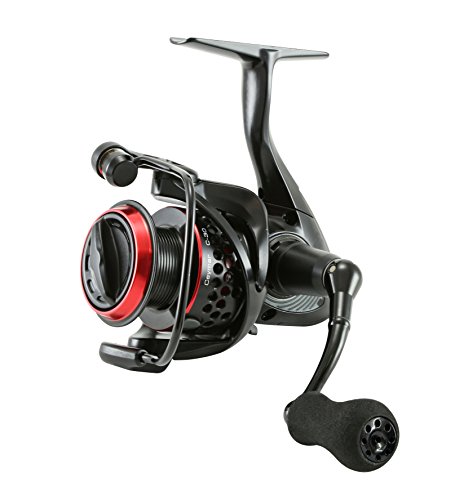 So, we’re Okuma fans… in fact that’s probably why we’re keeping it from the first recommendation. We’re predisposed to liking this reel. But, with good reason. Okuma makes awesome stuff.

The Ceymar is no exception to Okuma’s stellar reputation. It’s a great reel despite its sub 50 dollar price point. It looks like it costs more than you paid. It’s smoother than some reels costing 3 times as much. And it has some great innovations packed into that fairly lightweight package.

Casting and drag performance are great thanks to the elliptical gearing system. We’re not sure why an oval gear turning a round one  is so awesome… but it is. The multi disc oil-felt drag is also a reliable and consistent feature that trickles down from their higher-end stuff. Now, we doubt that it’s the premium Japanese oiled felt found in their other products… but for less than 50 bucks – we’re okay with that.

Overall it’s a great option for anyone looking for an excellent value. And Okuma is solid… like we said we’re longtime fans. One of our Okuma’s is decades old and still performs flawlessly. 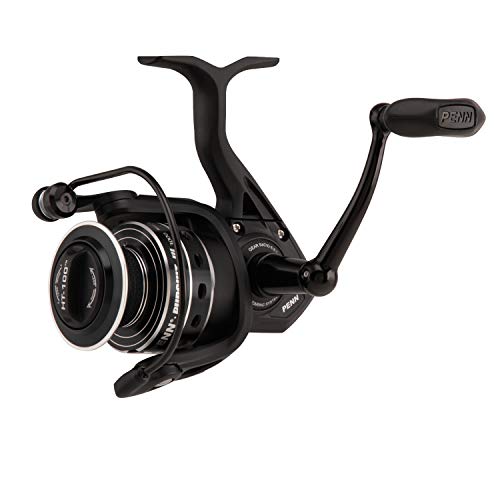 The PENN name is synonymous with smooth and solid spinning reels, and the Pursuit II brings that quality to an affordable, light-tackle package. It has 4+1 stainless steel bearings, a graphite body, and a machined and anodized spool. Penn engineered the Pursuit II for saltwater fishing, but it is just as at home in freshwater.

We originally included this reel as a top pick under 50… but due to some recent QC issues we’re going to bump it until we see what’s going on at Mitchell. Overall, we’re still hearing good things and still like the reel a lot. But, we can’t really put it in a best of list with more than a few complaints on the web. 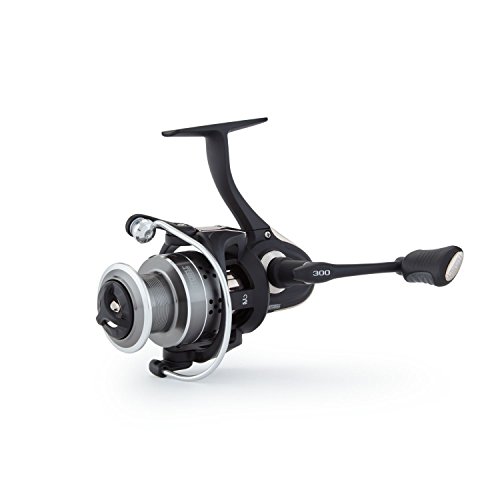 Mitchell invented the open-face spinning reel, and the company’s deep roots are evident in the Mitchell 300. It uses an 8-bearing system and has instant anti-reverse. The body is made from a strong polymer, and the spool and handle are lightweight aluminum.

The Mitchell 300 uses the company’s Bail Halo, which is a polymer arch located under the spool that increases rotor strength while eliminating monofilament line tangles beneath the reel. The smooth drag is carbon fiber and provides a consistent peel. The model 308 is a bit smaller, but the big-boy Model 300 is 9.9 ounces, has a 5.1:1 gear ratio, and spools 150 yards of 14-pound test.

What features are important for < 50 Bucks?

At a low price point like this the biggest feature you’re looking for is build quality. The thing with any value priced product line is that manufacturers need to keep margins strong to stay in business. That means they have less cash to invest in either design, materials, manufacturing, advertising, etc.

When you start packing too many higher-end features into a reel at a low price point quality is going to suffer. So our advice is to look for build quality and reputation first. (That’s what we did to build this article).

As far as the must have, bare minimum features go; look for these…

Whenever we see this we think of the movie “This is Spinal Tap”... especially when it’s 10+1 bearings. While the reference amuses us… unlike the Amplifier in the film; +1 isn’t one better. It’s just a term used to denote an additional type of bearing in the reel. This typically refers to a larger anti-reverse bearing.

Light tackle and gear isn’t only for the smallest fish. Medium-sized pan fryers like crappie become river monsters on lightweight reels, and that makes the fishing all the more fun.

There are light-tackle reels costing twice as much — or more — as the reels on this list. Unless you’ve got money to burn, though, these little under 50 dollar reels are all you’ll need to land most smaller fish species.

Related: Barbless Hooks – Is it time to clean out your tackle box?