When it comes to choosing a fishing kayak, there’s never been a better time to be a buyer.
There are more than a dozen reputable companies that specialize in fishing kayaks. The companies that have been around the longest have spent years honing kayak designs after getting feedback from their pro-staffers and customers.

While the seemingly endless options are clearly a benefit, it can seem a bit daunting when choosing a kayak. This is true whether you’re looking for your first ride or an upgrade.

Here’s a list of the top rated fishing kayaks you can currently buy. Just in case you’re in the market…

After changing the game with their pedal-powered Outback and Pro Angler kayaks, Hobie announced a major change to its lineup this year: the Mirage 180 Drive.

Their new pedal system offers all of the benefits of the previous Mirage system, except now kayakers can pedal in reverse with the simple pull of a cable.

Before, kayakers had to completely remove the fin system and put it in backwards to go in reverse.
That’s no longer necessary. Instead, anglers can back out of tight cover or hold their position in the current without using their hands.

The new drive system now powers all of their pedal kayaks, including the Pro Angler, Hobie’s battle-tested fishing machine.

Available in 12 and 14 feet – as well as a 17-foot tandem version – this kayak was built to fish. It’s built with an elevated seat and six horizontal rod lockers. This kayak is exceptionally stable, allowing anglers to fish standing up like they would on a boat.

The kayak is also compatible with Lowrance transducers, and it has rails that allow anglers to mount an endless array of accessories.

Native Watercraft has their own version of hands free fishing that has a loyal following: the Propel series.

Using the same stable hull and open deck layout as their original Slayer model, Native’s drive system pedals like a bicycle. Since the drive system powers an actual propeller, it was for years the only only pedal system that allowed kayakers to instantly pedal in reverse.

The Slayer features a wide-open deck, ample dry storage and a high seat. And it has plenty of mounting tracks for cockpit customization.

The range of size options is also a huge plus.

Native offers a 10-foot version that is lightweight and stable. This is perfect for those looking for easy transportation or a nimble watercraft for fishing in tight spots.

The company also offers a 13-foot model, as well as a 12-foot model that is 23 pounds lighter than its slightly bigger brother.

Perception introduced a brand new pedal kayak to the line up with its Pilot series.

At a thousand dollars less than other pedal kayaks, this is sure to grab the attention of budget-minded anglers.

This kayak uses a propeller drive system that allows anglers to pedal forward and reverse without any adjustments.

It also features an open deck and an adjustable captain’s chair.

This kayak hit the market in early 2017, so there aren’t many reviews available. But if you’re looking for a pedal kayak at an affordable price, consider taking the Pilot for a test ride. 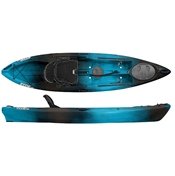 The Ride 115 is all about versatility.

First, the hull shape was designed to offer a perfect blend of speed, stability, and maneuverability.
It’s not the fastest ride on the water, but a kayak this stable has no business being as quick as the Ride 115. More importantly, it tracks exceptionally well and is at home in tight spaces.

This versatility makes the Ride 115 a great choice for almost any type of water. Because it paddles well, this kayak is a fine choice for open water paddlers. It’s maneuverability also makes it suitable for rivers, as well. The stability of this kayak is great for those looking to stand up while fishing, or paddlers who want a reliable platform while fishing off the beach or in rough open waters.

At 11.5 feet, this kayak is easy to transport and store. However, it doesn’t compromise on fishability or storage space.

It offers under-deck dry storage with access hatches in the middle and front of the kayak. It has mounting tracks and a spacious rear storage area with bungee cords. The seatback can be adjusted, and it also moves forward and backwards for optimal positioning.

Designed for the serious fishermen at a competitive price, the Pescador Pro is another great choice in the in the thousand dollar price range.

It has many features found in higher priced kayaks: a removable stadium-style seat with a low and high setting, adjustable foot pegs, mounting tracks, above-deck rear and front storage areas and a cockpit console for mounting electronics.

If you’re looking for an affordable kayak without compromising on fishability, check out the Pescador Pro. 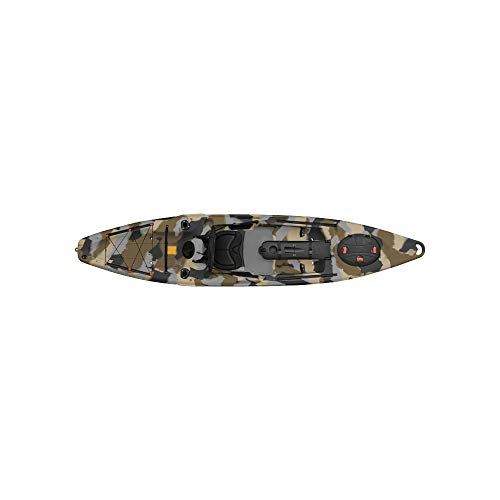 The Moken 12.5 is another great fishing package for a great price.

With below-deck dry storage, a sealable front hatch, side pockets and rear storage area, organizing gear and tackle is a pleasure.

Customizing this kayak is made simple with the mounting rails on each side in front and behind the seat. They even offer high quality gadget mounting hardware (pictured above). You can use it to mount a variety of gizmos… for example a kayak mounted fishfinder.

The kayak also comes with some unique features, like built-in rod holders, a padded standing area and a leash to help stand up on the water. Best of all, it has a wheel in the keel that lets you drag the kayak from your vehicle to the water without damaging the hull.
Speed 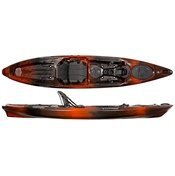 The Tarpon has long been a classic design since the early days of the sport. Its speedy, yet stable, design is a favorite among fishermen for its ability to slice through the water with little effort.

The Tarpon 130X is an updated version of the classic design.

Many of the upgrades are found in the cockpit. It features Wilderness System’s Flexpod OS, which allows for storage, electronics installation and is also compatible with the company’s electric motor.
It also features the removable Airpro MAX seat, as well as under-deck dry storage with hatches in the front and middle of the kayak.

There’s a reason why this kayak has been a mainstay throughout kayak fishing’s progression: it’s a great fishing platform that is an absolute pleasure to paddle.
Open water 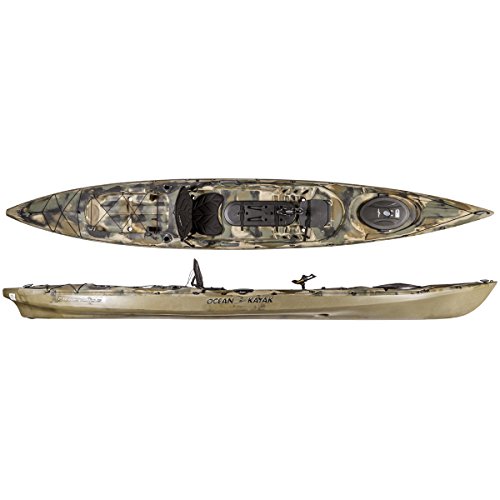 The Trident is equipped with everything you need  for an all-day voyage on the ocean or big lake.

At 15 feet, storage is not an issue. There’s below deck dry storage with access hatches in the front and rear. Directly in front of the seat, there’s a sealable dry hatch that’s easily accessible.
There’s also an oversize rear storage area that’s large enough to fit a cooler.

It was also built with long trips in mind. It features Ocean Kayak’s popular ACS III seat for comfort. It’s built for speed and is also stable enough to handle the rough conditions found in open water.
It’s also an ideal platform for fishing on big water.

It has a scupper hole that’s designed  to hold a fish finder transducer. The front of the cockpit has several options for mounting a fish finder screen. In the front dry hatch, there’s a built-in bag for storing batteries.

It comes with two flush rod holders and front and rear mounting rails. These are great places to rig rod holders for trolling.

There is an option that comes installed with a rudder, which is crucial for long paddles in open water.