So you’ve decided you want a fish finder and a GPS unit on your boat. Now, you must decide whether to purchase a single fishfinder GPS combo unit, or a separate fishfinder and standalone GPS. Now before you go hunt down the best fishfinder gps combo; read on to see if you might be better off with something else…

Your answer will depend on several factors, like  your boat, budget and where you fish.

Buying a single unit can save anglers money and allows for a cleaner setup on a boat console.

However, combination units require boaters to split screens if they want to simultaneously use both functions. Some fishermen need a bigger display to see both windows, and those models typically cost more than $1,000.

On the contrary, some boaters swear by having a separate GPS unit and a fish finder.

This allows them to have one unit dedicated entirely to the fish finder setting, and the other as a navigational unit.

This setup has several advantages.

First, anglers get more out of each unit because they don’t have to split screens. It allows a better view, and anglers no longer need to mess with buttons to switch between views.

This setup also provides anglers a backup in case one unit fails. This is especially important for offshore anglers who rely on GPS to fish and safely navigate. If one unit fails, they can simply use the other unit in its dual-mode setting.

Smart shoppers can also make the most out of two combo units. Bigger screen units are much more expensive. However, it’s entirely possible to find two separate units with 5-inch screens for far less than a single 10-inch screen model.

If you’re having a hard time deciding which way to go, here’s a guide to help you with your decision.

Boaters without budgets have the luxury of choosing the best of the best. But for those looking for a deal, here’s a little help.

Combo Units, Around and Under 400 Bucks

The Helix 5 GPS G2 by Humminbird comes in around 300 dollars, a great value in today’s market. It comes with a five-inch color screen that allows users to split or toggle between full screen views. It’s equipped with CHIRP dual beam sonar that excels in in both deep and shallow water. It also has Humminbird’s built-in maps and a card reader to upload additional navigational charts and save fishing spots.

For an additional $50, you can upgrade to to the Helix 5 CHIRP DI GPS G2 , which also comes equipped with Humminbird’s powerful Down Imaging sonar technology. This uses an separate high-frequency sonar wave to provide hyper-realistic images of the bottom.

Here are a few suggestions to purchase separate units that will give you optimum screen space and keep you in a budget, all for under or around $700.

Consider pairing a couple of Helix 5 units, which gives you a combined 10 inches of screen space.

For your dedicated GPS unit, go with a Helix 5 CHIRP GPS. Available from many retailers for around $300, this unit has strong GPS capability and standard CHIRP sonar. 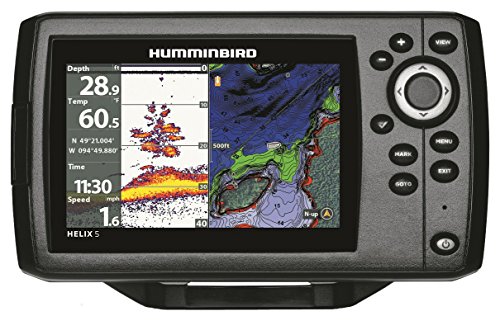 Then, choose the Helix 5 DI GPS G2 for your dedicated fishfinder. This unit offers the company’s best sonar technology. It’s equipped with CHIRP dual-beam sonar plus Humminbird’s powerful Down Imaging sonar. It also comes with a built-in GPS unit. This model costs another $50 on top of what you’d pay for the lesser equipped model.

If you don’t need GPS capabilities on both units and want to save 50 bucks, swap out the second unit for a HELIX 5 DI G2. It has the same sonar technology without the GPS. 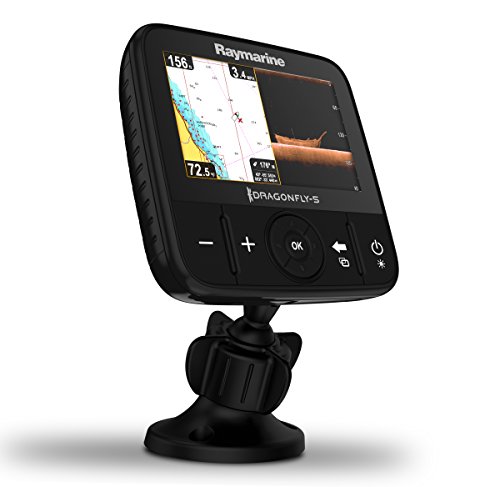 For your dedicated fishfinder, go with the Dragonfly 5. This offers the company’s leading sonar technology, a combination of CHIRP DownVision that provides super realistic images of the bottom plus conventional sonar for targeting fish. It’s also equipped with a GPS unit that tracks your route and allows boaters to upload aftermarket maps.

For your GPS unit, choose the Dragonfly 5 Pro. It has all of the sonar and GPS capabilities of the standard 5, plus a high-powered chartplotter that offers a real-time shot of where you’ve traveled.

Compare these pairings with the $1,200 MSRP of a single Humminbird Helix 10. This unit has all of the comparable sonar and GPS capabilities and a 10-inch screen.

Reasons to go with a single unit:

Not everyone has a limitless budget. Boaters looking for high-quality fish finders with GPS units can fit their needs without breaking the bank. There are plenty of units with five-inch screens that can be purchased for around $300. For a little extra money, you can purchase a few more inches of screen space.

These displays are big enough for most anglers to be satisfied with the dual-mode function.

Having dual units requires twice the installation time and space on your console. And depending on your current setup, you may need to upgrade your house battery to suit the higher power requirements.

Having a single unit that handles all of your fish finding and navigational needs keeps things simple. You’ll spend less time drilling holes into your boat and more time catching fish.

You Want the Best – Money isn’t an issue

Unfortunately, simplicity comes at a cost. You either lose functionality to an extent, or big money at the register.

If you want the simplicity of having a single unit but don’t want to compromise functionality – and your budget allows for it – you can purchase a jumbo-sized fishfinder.

With 10 or 12 inches of space, you have the best of both worlds. Each function is displayed in a large window, making it easy to read and see the fine details. And it’s combined into one unit.

These big-screen fishfinders start around $1,600. Boaters can easily spend at least $1,000 more for top-shelf units.

Still not sure?  Here are some reasons to go with separate units:

You want screen space, but you’re on a budget

You’ve decided that splitting a 5-inch screen won’t work. Maybe your vision isn’t quite like it used to be, or you don’t want to be squinting on your boat all day.

If you’re willing to shop around and think creatively, you can put together a nice setup that will cost considerably less than a single big-screen unit.

Consider purchasing two five-inch display units. Choose one that has the best sonar technology and a built-in GPS unit as your dedicated fishfinder. Then, choose another GPS/fishfinder combo with more basic sonar capabilities for your dedicated GPS machine.

This setup gives you five inches of screen space per function. It’s entirely possible to spend under $700 with this approach.

For boaters lucky enough to put together their dream boat, why not have two separate units for GPS and sonar?

While some prefer the simplicity of having a single unit, having two high-quality units allows for the optimum fishing experience.

Having separate units allows anglers to run several sonar windows on one large screen and a map on another.

This setup provides anglers with a big-screen view of the entire water column and a detailed picture of where they’re going.

This may seem like overkill to the average angler. But die-hard fishermen demand the most from their boats.

When you can’t risk losing sonar or GPS functions

There are certain scenarios where you can’t have a unit fail. Maybe you use GPS coordinates to find reefs or other fishing spots. Or maybe you rely on your GPS to get you home safely.

Having two GPS/fishfinder units is insurance in the event one fails.

It gives anglers the peace of mind that they won’t have to head home early – or will be able to find their way home – if their primary unit quits working.

If you’re fishing the local lake or river, this probably isn’t a big deal. But for offshore anglers who burn hundreds of dollars of gas and travel as far as 100 miles offshore, equipment failure isn’t acceptable. It can mean ending your day before the first cast – or risking your safety.

A word about kayaks

Having a separate GPS unit has several advantages.

You won’t have to use a bigger battery necessary for two units or a larger combination model. You can also get away with using a small, simple fish finder and still have GPS capabilities.

These units can be mounted on the kayak or kept in your pocket or life vest. At the end of your trip, you can remove the GPS unit from your kayak so it doesn’t get damaged or stolen.

If you like kayaking, you’re probably enjoy other outdoor activities.

Having a portable unit allows you to use your device away from your kayak. It also gives you the option of using a unit that allows others to track your movement. Whether you’re backpacking or kayaking, this safety feature offers great peace of mind for you and your loved ones.

If you want a really affordable GPS / Fishfinder combo check out the Garmin Striker 4 or Striker Plus line.

The Lowrance Hook 5 comes with a five-inch color screen and GPS capability. It also offers the latest in fish finding technology, using CHIRP sonar plus DownScan scanning that also provides hyper-realistic images of the water.