Once only available to commercial ships and salvage divers, side imaging sonar is now a crucial part of many anglers’ fishing arsenal. But, do you really need all the power of a side imaging fish finder? We think you might.

The technology debuted for non-commercial fishermen in 2005. While it was pricey and exclusive to just a few companies in its early days, that’s no longer the case. Instead, every leading brand sells a fish finder with side scanning – and many are surprisingly affordable.

While traditional sonar reads directly below the boat, side scanning sends a pulse of waves that travel along the bottom of the water. This produces a high-definition bird’s eye view of the bottom for anywhere between 40 and 180 feet on each side of the boat.

Used in conjunction with down scanning, side scanning can give anglers a serious edge in a number of fishing scenarios.

Side imaging is great for finding structure and other habitat.

While traditional sonar shows just a 5-foot to 15-foot area, side imaging provides an image that extends far beyond the bottom of the boat. And instead of zigzagging an area to mark bottom, anglers may only need to pass through an area once to find every hidden rock, pothole or stump on the bottom, even in shallow water.

The technology itself  is improving  in its ability to find fish, too. That means anglers can now find fish that are well away from the boat and target them without getting anywhere close enough to spook them.

Some anglers even swear that they can accurately identify which species of fish are marked through side imaging. Baitfish appear as small, clustered objects. Game fish are larger, and they appear further apart when traveling in groups.

Want the best Side Imaging Fish Finder to your boat?

Garmin is a relative newcomer to the side imaging game, and they’re turning heads with the Striker 7. 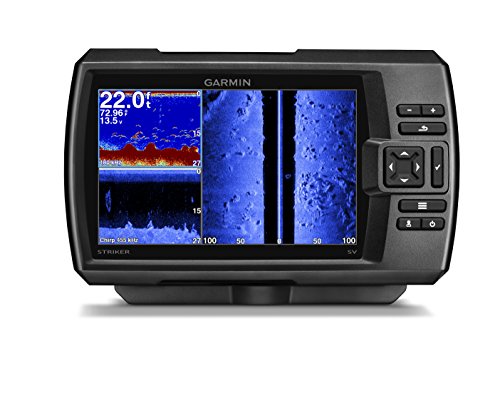 For under $500, the all-in-one unit is equipped with a 7-inch color screen, CHIRP sonar, high-definition side and down imaging and a built-in GPS and chartplotter.

Along with the CHIRP sonar, anglers can display all three sonar readings simultaneously for optimum fish and structure finding capabilities.

Available for an affordable price without sacrificing screen size or technology, the Striker is hard to beat.

Available for an affordable price without sacrificing screen size or technology, the Striker is hard to beat.

Add side imaging into your fishing arsenal – without spending a fortune.

For under $500, the Helix 5 gives you side imaging, along with high-definition down imaging and CHIRP sonar. It also has a built in GPS unit, giving anglers a powerful chartplotter and Humminbird’s UniMap cartography.

As is the case with all Humminbird units, there’s no need to install a special black box for side imaging capability. Instead, everything is built into the unit, which makes installation a lot easier.

If a five-inch high-definition color screen is enough, this model will give you a clear view of what lies beneath for a great price.

Moving up in screen size, the Elite-7 is a powerful fishfinder with a high-definition, 7-inch color touch screen. 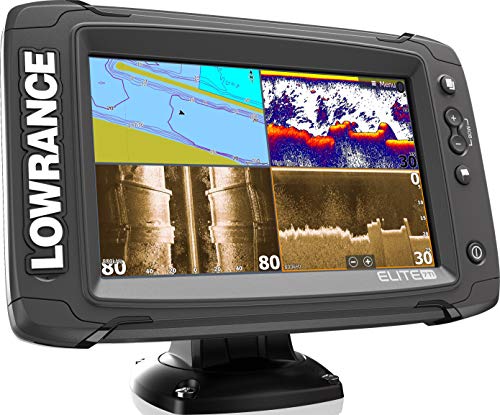 This unit features Lowrance’s StructureScan, which provides high-definition images from that look like photographs of the bottom.

The powerful side imaging view can scan 600 feet on each side. The company also claims their side imaging outperforms other models in shallow water. That means much cleaner images of both structure and fish.

The unit also provides high-definition down scanning images, as well as traditional bottom readings from a three-channel CHIRP sonar.

Better yet, the Elite-7 allows you to display images from each sonar setting. Thus giving anglers a full picture of the bottom.

It’s also equipped with a built-in GPS unit and a powerful backtracking tool that allows you to rewind sonar readings and mark a waypoint on the GPS unit to easily revisit areas you passed over.

Best Available: Humminbird changed the game in 2005 when it gave anglers the first ever fish finder with side imaging.  – Now, they’ve unveiled their newest technology: Mega imaging. 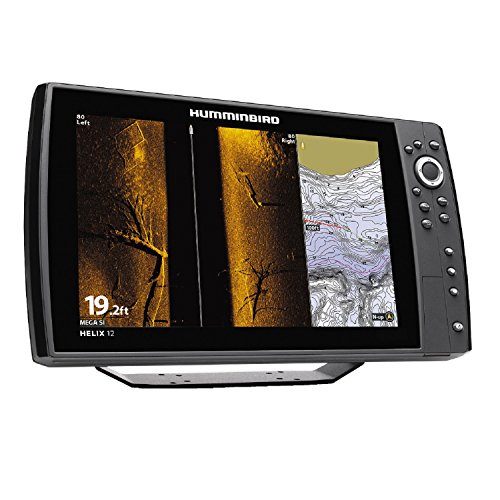 By using super-high frequency sonar, this model provides even greater clarity for down and side imaging. This high performance is limited to depths of 125 feet, although most anglers rarely venture into deeper waters.

Humminbird pulled out all the stops with thier top shelf model. They left no feature behind in this model. That includes a jumbo 12-inch color screen, a built-in GPS and CHIRP sonar. It even is compatible with a wireless Bluetooth remote.

If you’re unwilling to settle for anything but the best, this is the model for you.

Are you an explorer? Maybe you’re the type that will travel to find that perfect fish. Are you always seeking out new waters? These are the kinds of questions you need to ask yourself before dropping serious coin on any tech. Especially one that you’re not going to use every single day.

If you’re adventurous and fish in new waters on the regular… a higher price side imaging unit might make sense. If you’re fishing the same ‘ol reservoir over and over… you’re not going to see all of the benefits of a premium fish finder. Things like GPS, elaborate charts, and planning features will be more or less wasted.

This tends to be the last thing we think of when we’re comparing features and tech specs. However, what’s the point of getting something with a ton of features if it becomes obsolete by the time you figure things out?

If you’re experienced with fishfinders there probably won’t be a crazy steep learning curve. But, if you just bought a boat and don’t have the time to learn… spend that cash on gas to get you out on the water. Buy, something more affordable with slightly fewer features.

If you want a side imaging fish finder for a kayak; start thinking about how you’re going to mount and power it. Small vessels like kayaks, rafts, and kick tubes require some MacGyver style mounting. It’s not impossible, but until side imaging gets super small and cheap… stick to larger boats.

Boats with electrical systems and places to hard mount a transducer (in a good spot) are the way to go in this scenario. Plus… your fishfinder should never cost as much as your boat.

Do I Need a Large Screen?

When you’re shopping side imaging fish finders you should definitely look for a larger display. Think about all the extra under water real estate you’ll cover; it would be hard to see much on a tiny screen.

Also, since these units are typically feature-rich most can split the screen into a super informative dashboard. And again, a larger canvas means more information at your fingertips.

Do I need a Transducer?

This is something that’s dependant on the fish finder you order as well as the boat in your slip. While some fish finders come with a transducer in the box, you’ll have to figure out where the best mounting location would be for an SI fishfinder. Sometimes transom-mount will give you the results you’re looking for, but sometimes you’re going to need a hull mounted one.

Unfortunately there are way to many scenarios and setups to cover in an article like this. So you’ll have to either try things out, or do a bit a of research on you’re particular style of fishing boat. If it were our boat we’d probably just go with what’s in the box first and see how it does. From there we’d start shopping transducers and bust out the drill bits and or glue. But, we’re more into fishing than turning wrenches.

How is Down Imaging Different than SI?

It’s really as simple as one vs two sonar beams. A down imaging fish finder sends a single wave down and assembles the “slices” into a easy to read image. The downside is that the slices only show what is reflected from one angle. So you get more of a 2D look.

To get a more detailed picture of the structure(s) below the surface you can use two beams. This is sort of how your eyes work. The slightly different angels provide a lot of perception and detail.

This depth perception offers a lot of insight into what’s actually on the bottom. And this is ultra valuable when you’re searching for fish hideout spots in submerged structures.

Are there and SI downsides?

The big one is obviously expense. But, that is pretty easy to justify if you have the need and the disposable income. However, there is a downside that people tend to gloss over at the outdoor super store. And that downside is that you have to be moving to get anything useable. Move to fast and you lose fidelity. You’ll definitely want a good trolling motor to pair with this type of fishfinder..

The other (minor) downside that these units only show you what you’ve already passed over. They cannot project the sonar beam forward. But, this is the case with other types, like down imaging fish finders. To “see into the future” you’ll need a device that projects a 360 degree beam(s). And, as you probably guessed… it’ll cost ya.

In our opinion side imaging is great and this forward looking ability isn’t completely necessary. Compared to the narrow view units we used in the past side imaging is a huge leap forward and an enormous time saver. What you can now see in a single pass would have taken ages 20 years ago.